An Architecture of the Sea – including work by Mizuho Nishioka, Tane Moleta, Wayne Barrar and Kerry Hines – is part of the Ars Electronica Festival for Art, Technology & Society, which is being held online 9-13 September 2020.

The festival, titled In Kepler’s Gardens, features around 120 sites around the world. An Architecture of the Sea is part of Garden Aotearoa New Zealand.

An Architecture of the Sea is an exhibition in an immersive virtual environment. Curated by Tane Moleta, it features:

* Kerry Hines – written text and audio works from an untitled series-in-progress of poems centred on close looking, which take maritime Wellington as their starting point.
* Mizuho Nishioka – works from an in-progress series titled Cadastral Recordings, which explore geography, the medium of photography and the temporality of the sea. The works employ traditional observational fieldwork, physical sampling, streaming data-sets, physical computing and photography.
* Wayne Barrar – works from two series. The Geography and Geometry of Salt utilises digital moving image photomicrography to visualise the return of salt samples sourced from mining operations (in New Zealand, USA, Australia and Spain) to their liquid lineage of the sea. The second series of digital photomicrographs, The Scale of the Surface, randomises collected and varied fish scales sampled from Wellington fishing trips with the ‘simulated’ surface of commercial artificial fishing lures.

To view the exhibition after 13 September, go to the permanent archived link here. Note: runs best via Firefox. 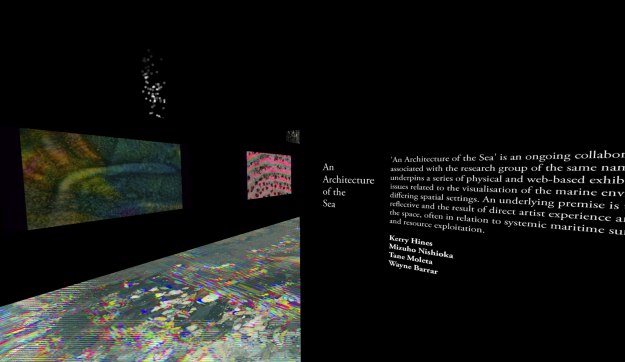